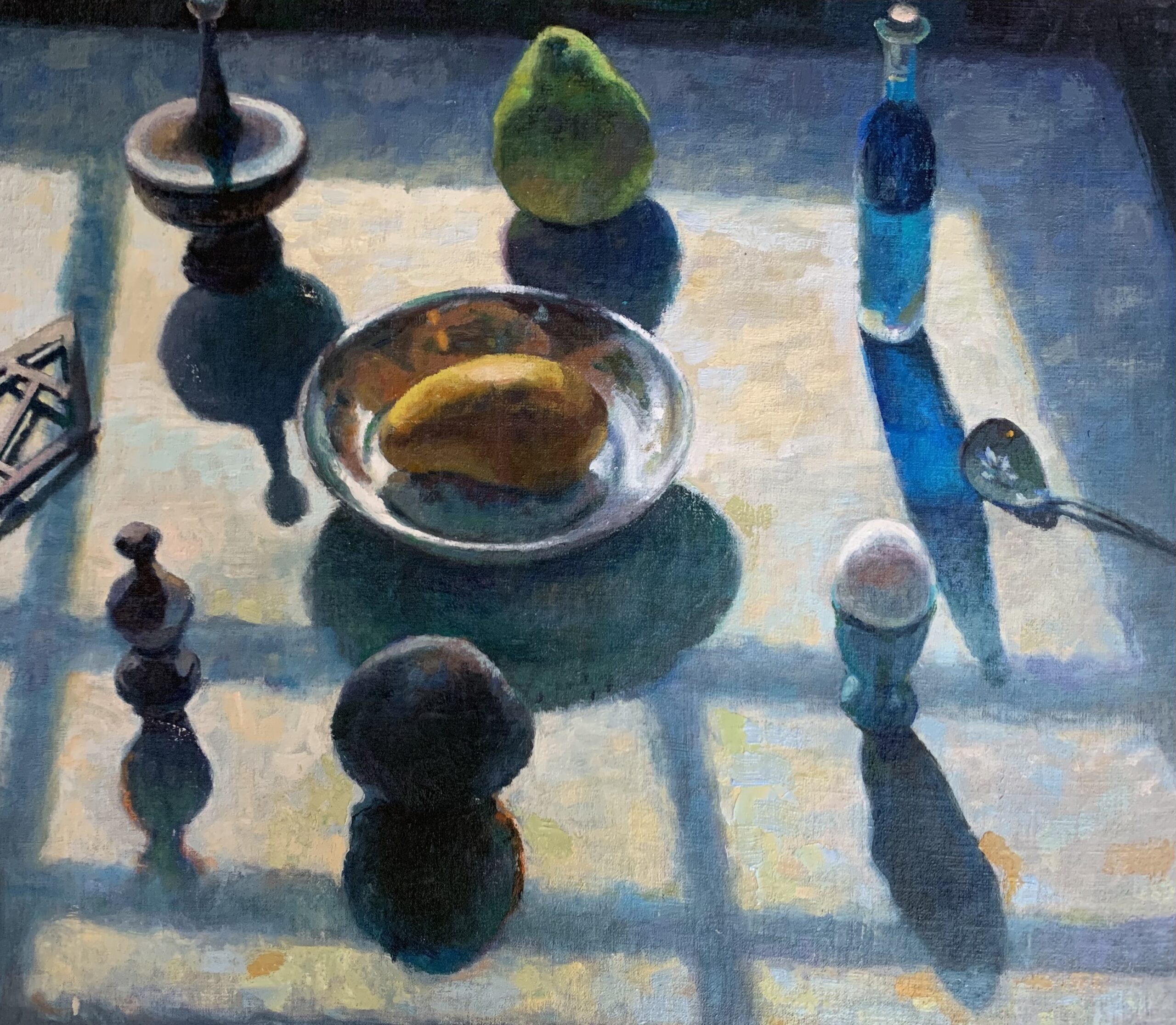 After 30 years of living in Sarasota, Florida and teaching at the Ringling College of Art and Design, artists Peter Brown and Robin Cody packed up their household and headed north, arriving in Gloucester, Massachusetts on the very day everything shut down due to the pandemic.

Undeterred by these circumstances, they set about renovating the house they had purchased and found studio space in Lanesville Village. They had carefully chosen Gloucester as it was a city/town close to where they had grown up. Peter’s family home was in Lexington, however he spent every summer in York Beach. His grandmother first bought property on the Nubble in the 1930’s and generations followed. And yes, “Brown’s Ice Cream” is a part of Peter’s heritage.

Robin’s childhood home was just up the road in Ipswich. She claims remembering the sight and smell of the extensive salt marches of the area are part of what drew her back and are an important influence in her painting.

During my tenure at the George Marshall Store Gallery, I had the opportunity to exhibit work by both artists. I found it intriguing that although they shared studio space, were married, raised two daughters, I thought their work could not be more different each from the other.

Peter’s formal geometric compositions were initially inspired by Roman floor and wall mosaics which he studied when he was a visiting artist at the American Academy in Rome in 2010. His most recent “Woven” series emphsizes the formal aspects of colors and shapes suggesting both depth and movement. The color, placement and repetition of the geometric shapes are unexpected and hold one’s attention almost like a meditation.peterbrownpaintings.com

By contrast, Robin’s paintings are in response to nature and include landscape paintings, both urban and rural, and still life paintings of simple objects and things collected from nature. Part of my reason for visiting Peter and Robin was to return one of Robin’s paintings which I was unable to return before. So, I have been able to enjoy “Papaya and Various Objects” for all these past, many months. In fact, I am looking at it right now, because although my intentions were clear, it was only as I drove over the bridge into Gloucester that I realized that I had forgotten to put it in the car. Oh well, next time for sure. robincodypaintings.com

The more I look at this painting and at the photographs I took while visiting their studios, I do see a connection between their work. When viewed side-by-side, I notice similar color choices and a certain order and calm in their compositions.

We concluded the studio visit by taking a short walk down the street to the Harvey Reservation, one of the many sites and trails managed by the Essex County Land Trust.. Offering unparalleled views of Ipswich Bay, including Crane’s Beach and Plum Island, Harvey Reservation is one of the best spots on Cape Ann to sit and watch the sunset. And on a very, clear day your can see Mount Agamenticus and the Isles of Shoals. We said our good byes here and vowed to see each other again soon.

This was not my first visit to Gloucester and it will not be my last. From York, it is as easy one and a quarter hour drive, with a choice of extending the tour on rural roads. I got off at the Georgetown exit and continued on Route 133, the Essex Coastal Scenic Byway.

The city of Gloucester occupies the tip of the Cape Ann Penninsula . It consists of an urban core on the north side of the harbor surrounded by the outlying neighborhoods of Annisquam, Bay View, Lanesville, Folly Cove, Magnolia, Riverdale, East and West Gloucester. Each neighborhood has a unique character and history of various waves of immigrants including Portuguese, Italians, Finns and others who worked in the fishing industries and granite quarries.

Besides these industries, by the mid-19th century Gloucester became a mecca for artists. By the turn of the century, many artists came to escape the city summer heat and established studios in Rockport. Winslow Homer, Childe Hassam, Edward Hopper, John Sloan, Maurice Prendergast and John Twachtman are just some of the renown artists who came.

Their stories and the history of the art colony are exquisitely told in the galleries of the Cape Ann Museum. This is truly a gem of a museum and I recommend it as one of your first stops in Gloucester. Their holdings include the largest collection of works by marine artist Fitz Henry Lane, galleries dedicated to the history of the fishing, maritime and quarrying industries, a contemporary art collection, prints, blocks, textiles and archives of the Folly Cove Designers, a First Order Frensel Lighthouse lens, and in short, there is something for everyone.

Collage of images from the collection of the Cape Ann Museum.

Absorbing culture always builds an appetite and the best remedy is lunch at Passports at 110 Main Street, a five minute walk from the museum. After ordering, you will be presented with the restaurant’s signature — a huge, hot- from- the- oven popover. There is lots to choose from, but I can never pass up on the Adriatic Seafood Stew.

Cape Ann has the reputation for some of the best fried clams in the region. Leaving Gloucester on route 133 you will pass J.T. Farnhams “award winning clams with a view.”

From the length of the line out the door, it must be good and you can eat either inside their diningroom or at a picnic table overlooking the Essex River and Great Marsh.

Just a few doors up the street from Passports is the Goodlinens Studio, a beautifully curated store of “useful goods for kitchen, bath, home and gifts.” Their specialty is linen and linen towels that they design locally and source in Lithuania, a region known for fine linen production.

Inspired by the quality, durability and natural character of the product, I came away happily with a small linen towel which I plan to keep in my car as my “car napkin.” It is my sister Kitty’s idea to always keep a cloth napkin in the car – very handy when you can’t resist getting a road coffee with a buttercrunch donut. 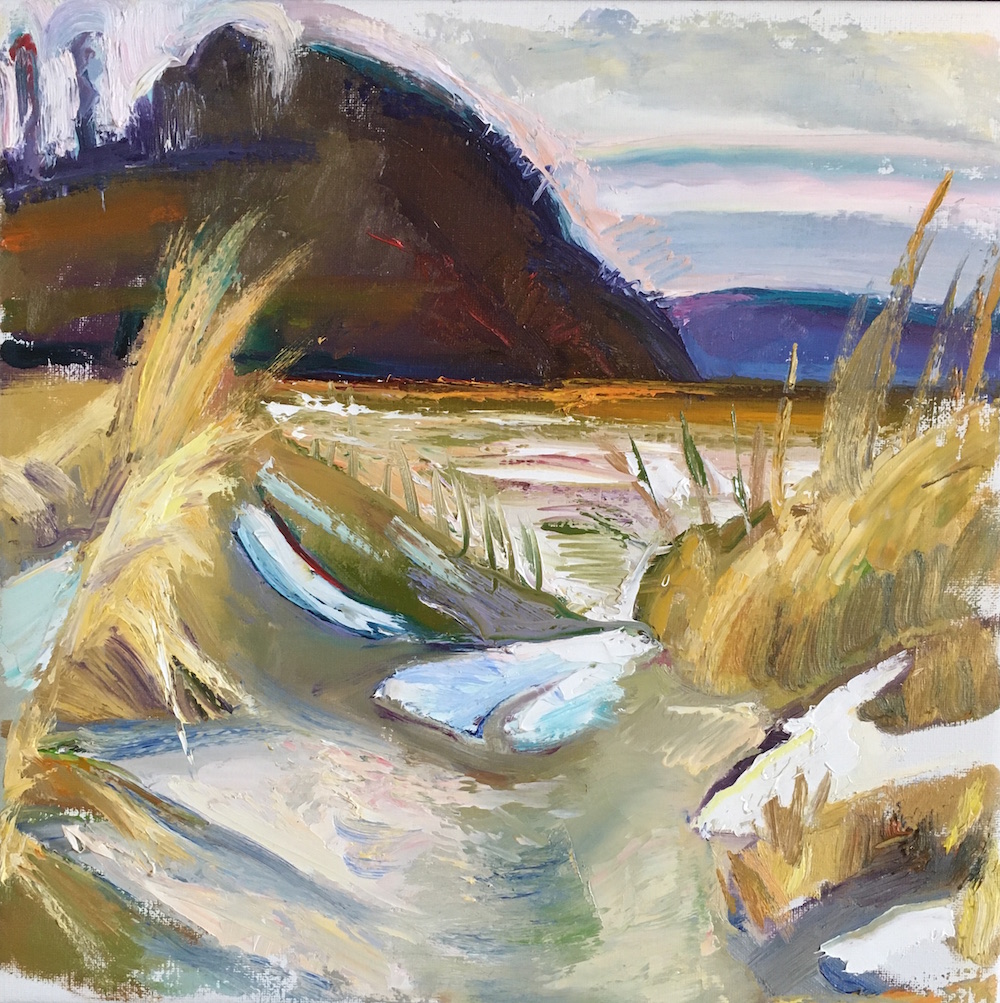 Brett Gamache by coincidence, also spent his summers in York Beach, where his parents now keep a year-round home. Brett, his wife Kerri and their eight-month old son Quin, live in Ipswich, Massachusetts. Life is very busy for Brett and his family. Kerri teaches English at Middlesex Community College and Brett divides his teaching time between Endicott College, Massachusetts College of Art, and the Cambridge Center for Adult Education. Between semesters and at the end of many workdays, Brett heads to the dunes at nearby Crane’s Beach or the breakwaters in Rockport.

﻿“I particularly like the late afternoon light,” explains Brett. “I have to work quickly and move the paint with a pallet knife.” When weather or time does not permit, he uses the same techniques to paint colorful still lifes in his downtown Ipswich studio.

Hoping to get a different perspective of the landscape, Brett has created a self-directed residency. He traded a painting with Kerri’s uncle for a small flat bottom boat and applied to the John Anson Kittredge Fund to buy an electric motor. He refers to this as The Green Studio and hopes to launch the boat with its quiet electric motor in the weeks ahead.